Jon Anderson at the Somerville Theatre 4/23/11 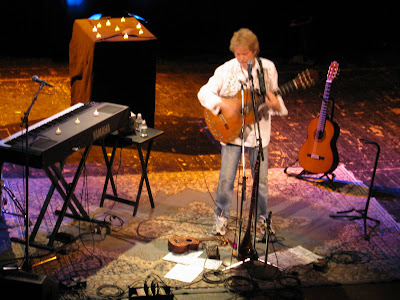 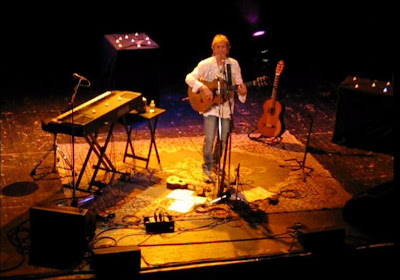 Jon Anderson played a great solo show at Somerville Theatre on Saturday night. We had great seats in the front row of the mezzanine. Jon's voice was truly in top form. This was the first night of his tour, and he sounded fantastic. His voice was so clear and beautiful, especially on I'll Find My Way Home. It was amazing, and the sound quality was really wonderful in the theater.

Jon has definitely gotten more comfortable as a one-man-show. He had the audience laughing at anecdotes from throughout his career, from his days in a band with his brother Tony, through all of the years he spent with Yes, to his stint on Top of the Pops with Vangelis. He easily segued from guitar to mountain dulcimer to piano to ukulele. 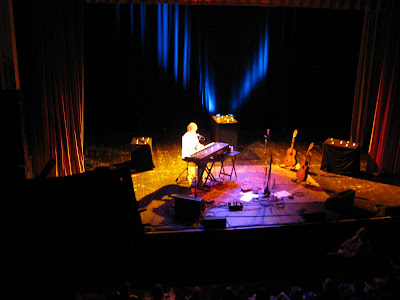 Jon is a really positive person, and he always has an exuberance for life that just can't help but make you smile. He played such Yes favorites as Yours Is No Disgrace, Sweet Dreams, Long Distance Runaround,  Time and a Word, And You And I, Turn of the Century, Soon, Close to the Edge, and Starship Trooper. He performed an arrangement of Roundabout similar to the Tsongas Arena Yes show in 2005, which is an easy blues shuffle. He had the audience singing along to Your Move and All Good People. I'm not usually a huge fan of Owner of a Lonely Heart, but his stripped-down version was quite enjoyable. Many times when listening to Yes songs the lyrics get lost for me and Jon's voice becomes more of an instrument of its own. Tonight it was nice to be able to totally  focus on the words, which were easy to discern in the straightforward arrangements. One ironically funny incident came when Jon messed up the lyrics to Revealing Science of God. The lyric after the one he forgot is "What happened to the songs we once knew so well?" Too funny! 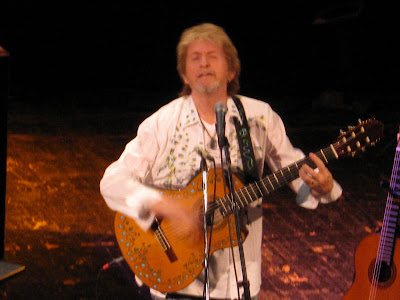 He played two songs from his Olias of Sunhillow album (Flight of the Moorglade and To the Runner). Other solo songs including Show Me, You've Got the Light,  and the jaunty Music is the God of the World (Have Guitar Will Travel) were also quite enjoyable. Tony and Me was a cute song about playing the Cavern Club with his brother in 1963, when they wanted to be the Beatles. Jon and Vangelis tracks I'll Find My Way Home and State of Independence were superbly rendered. He ended the show with the a capella  O'er,  which was truly moving. It was timeless and sounded like it could have been an old traditional Irish folk song.

Uncharacteristically, Jon didn't do a meet and greet after the show. (We met him previously at Avalon in 2005 and in Quebec City in 2006). It's been a really rough month or so for Craig and myself due to the death of Craig's father and Craig being diagnosed with Multiple Sclerosis, and this show really snapped us out of our funk. His tremendous positivity and wonderful attitude really rubbed off onto us.  We would have like to have been able to thank Jon for that personally.  But we'll thank him here instead.

If you have the opportunity to see Jon's solo show - do it! We guarantee you won't be disappointed.

Here's a pic of Craig and I with Jon from 2005 at Avalon in Boston: 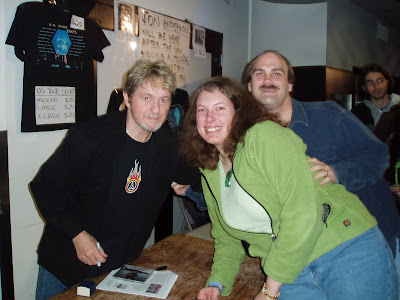