When we spent time with Mukul and his family in India last October, we spoke often of our "family" in Guatemala. Mukul had never been to Central America and didn't know very much about MesoAmerican history. We told him that he should accompany us some time on a trip to visit Humberto, Paulina, and the kids. We knew that he would enjoy their company and that he could learn a lot about Mayan culture from Humberto.

Mukul and Craig in front of Motif # 1, Rockport
We had planned a trip over the Fourth of July, and Mukul was able to join us. He arrived in Boston on June 25 and spent a few days at our place before we all headed to Guatemala together on June 30. 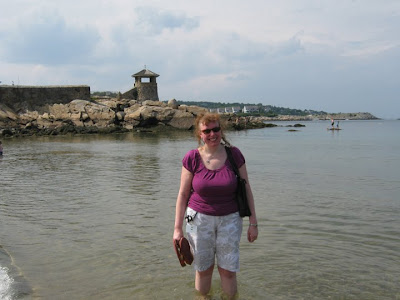 Steph at Front Beach, Rockport
On Saturday the 26th, we took him around the North Shore. We went to Ipswich, Rockport, and Gloucester. It was a lovely summer day and we enjoyed wandering around seeing the sights. We got mocha frappes at Zumi's in Ipswich and walked around town. We walked around an old cemetery which had many graves from the colonial period. Then we drove to Rockport. We were lucky enough to find a parking spot with two hours still on the parking meter. We walked along Bearskin Neck, stopping to get fresh fudge and salt water taffy. We took some pictures of Motif # 1 and then walked along the beach, dipping our toes in the cold Atlantic at Front Beach. We learned that defacing money isn't illegal if you totally deface it, and pressed a penny into Motif #1 as a souvenir for Mukul.  Then we stopped in for an unannounced visit at Craig's grandmother's apartment. It was wonderful to see her and to introduce her to Mukul. On the way home we drove through Gloucester and saw a bunch of spectators on a hill side. We would learn later that the greasy pole contest was going on for St. Peter's Fiesta. Then we stopped in at Craig's parents' house and chatted with them for a while. Mukul enjoyed looking at Craig's mother's garden, and was intrigued by her solar garden lights. We sat by the pool and had a very nice conversation. 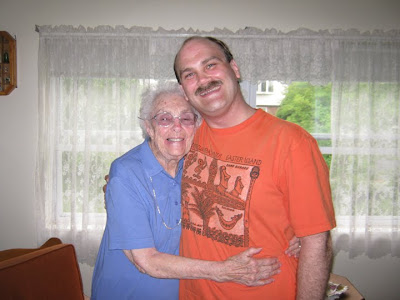 Nana and Craig
The next morning, we headed into Boston for a Duck Tour. Craig and I had never been on one before, but had heard good things, and we thought it would be a nice way to show Mukul the city. It was another gorgeous summer day and we rode in the back of the Duck in the open air. Our "con-duck-tor" claimed to be descended from Shakespeare, and he was dressed as if he were from Elizabethan England. He was quite amusing and told us various facts as we drove through the city. He told bad jokes at red lights, and told us that if we wanted him to stop, we could make the light turn green. He was really entertaining. We started the tour at the Museum of Science, and drove through Charlestown, up toward the North End, Beacon Hill, the Back Bay...it was a great overview of the city. Near the end of the tour we felt a little refreshing splash as we drove right into the Charles River  not far from the Craigie Drawbridge. We even saw a pair of geese swimming with two goslings. Our con-duck-tor let some of the kids on board steer for a while in the water. We then drove back up onto dry land and made our way back to the Museum of Science to disembark. 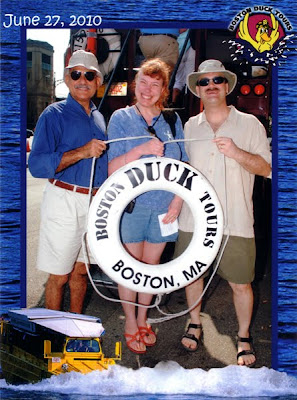 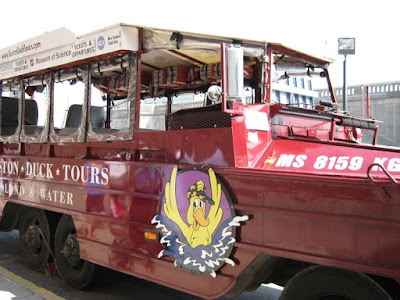 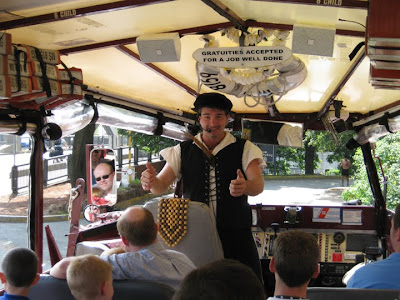 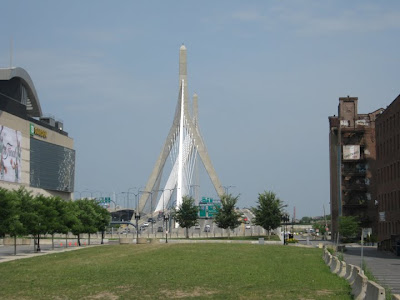 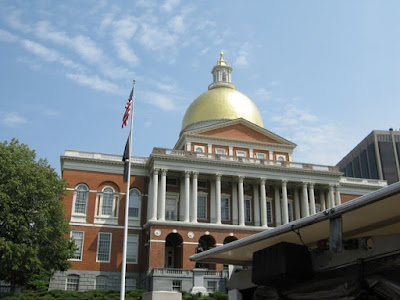 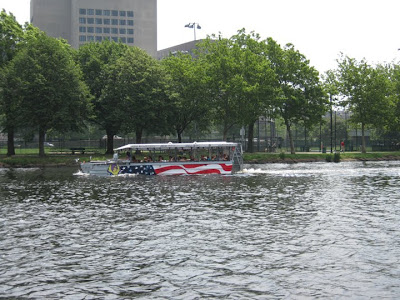 A Duck Boat on the Charles River
After that we headed to the Harvard Museum of Natural History to see their glass flower exhibit. The first time we had ever met Mukul, he said "You're from near Boston? Have you seen the glass flowers?" Being an avid gardener himself, and having led a tour group of Harvard alumni who had told him about the glass flowers, he had been very eager to see them for years. 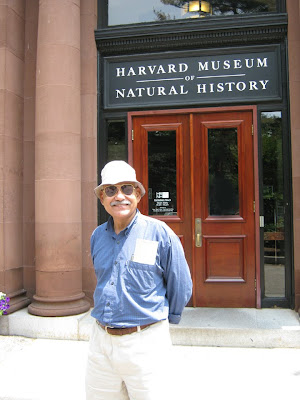 Mukul at the Harvard Museum of Natural History
The "glass flowers" are over 3,000 scientifically accurate models of flowers and plants made by glass artisans Leopold and Rudolph Blaschka. The father and son team from Germany made these models between 1887 and 1936. They are accurate enough that they can be studied by horticulturists when an actual plant sample is unavailable. Looking at the models, it is hard to believe that they are made of glass. They are incredibly delicate and life-like. There are some larger-than-life magnifications of various plant organs. It was fascinating. 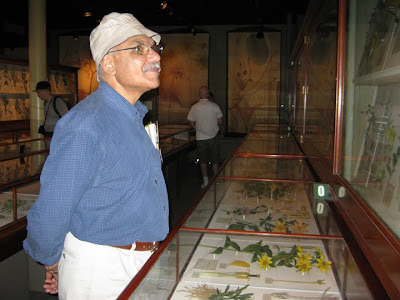 Mukul studying the glass flowers
After we were done at the museum, we wandered around Harvard Square and stopped in for a nice Indian buffet brunch at Tanjore. Craig and I found their chicken tikka masala to be especially tasty. We then walked back to the car and headed for home. A little while after we arrived home, Mukul's friend Abhishek came to pick him up. Mukul spent the evening at their house with Abhishek, his wife Tina, and their nearly one year old baby Darika. They only live about 15 minutes from us, what a small world. 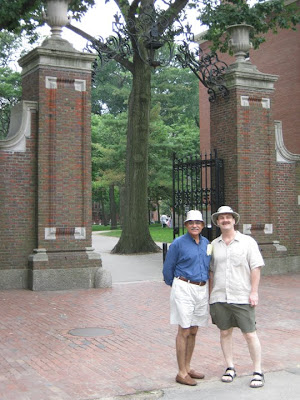 Mukul and Craig in Harvard Yard
On Monday, Craig and I got out of work early and we took Mukul out to visit my parents. We showed him around the house and yard and then went out for dinner. Mom then invited us back to the house for tea and dessert, and she went a little bit overboard making delicious desserts. We had fun chatting until it was time to go, as we'd have to go to work again in the morning. 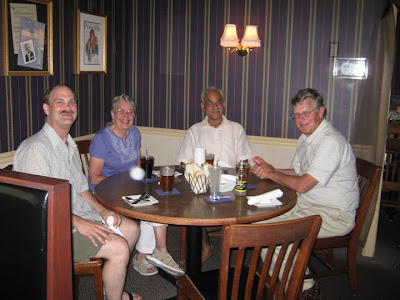 Out to eat with Steph's parents
To Be Continued...
Posted by Craig and Steph at 7:47 PM