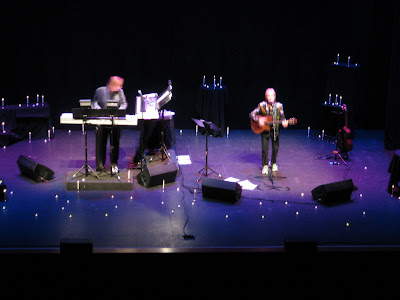 Rick Wakeman and Jon Anderson played several shows in New England in support of their recent album The Living Tree. They didn’t play in Boston, so we had the choice of seeing them in Concord, NH or Worcester. Both shows were on weeknights, but we chose Worcester as we were able to get front row center mezzanine tickets.
The show was at the Hanover Theatre, a new venue for us. It is around 100 years old and has alternately housed playhouses and movie theaters. It recently underwent a major renovation and is now a beautiful concert hall. Everything was freshly painted and there were dazzling crystal chandeliers. The seats were exceedingly plush and roomy and we had a perfect view of the stage, which was set up with dozens of electric candles, several keyboards, and several guitars.
Shortly after 7:30, the strains of Strauss’ Also Sprach Zarathustra (the theme music from 2001: A Space Odyssey) blared forth on a trumpet. The final notes were comically out of tune, and kept getting worse as it repeated. It was very Monty Python-esque, and as it concluded, Rick and Jon walked out onstage to thunderous applause.
We have seen both of them play live before as part of Yes, and also in their respective one-man-shows.  A lot of people in the US don’t seem to realize what a wonderful comedian Rick is. He has developed a second career as a TV presenter in the UK due to his wonderful sense of humor.  He never gets a chance to speak to the audience during Yes shows, and he hasn’t done a lot of solo touring here in the US, so this was a pleasant surprise for a lot of folks in the audience who had perhaps expected Jon to do most of the talking. In fact, their repartee was quite amusing. Jon would try to introduce a song and Rick would always interrupt him with slightly off-color comments and jokes. Jon played the straight man but often dissolved into laughter at Rick's jokes.
They played stripped-down versions of Yes favorites, as well as 7 selections from their new Living Tree album. The theater had wonderful acoustics, though when the audience got laughing it was difficult to hear the onstage banter. We had avoided looking at set lists from prior concerts because we wanted to be surprised by the material.
Many of the Yes songs were ones that Jon had performed earlier this year as part of his one-man-show, which we saw in Somerville and Londonderry. The versions were similar but with the addition of Rick's lovely keyboard work. Starship Trooper had a lovely classical piano flair to it. Sweet Dreams was jaunty with Jon on rhythm guitar. Time and a Word was given a reggae treatment. And You and I got its rightful Rick keyboard solos.
A pleasant surprise was a stripped-down version of Yes’ cover of Paul Simon’s America (Jon’s wife Jane had suggested that they play it in celebration of Jon becoming an American citizen two years ago). It was much more of the Paul Simon version of the song as opposed to the traditional Yes interpretation.
The two made fun of their ages (they have been playing together for over 40 years) and Jon had a music stand next to him with lyrics from the new album. Though he knows the classic Yes lyrics cold, he said he is having a hard time committing the new lyrics to memory. Jon called this the "recital" portion of the show. The new songs worked quite well interspersed with the classics.
For artists that have such a vast repertoire of material, if you don't see new songs during the time that they are touring the album, you may never get to see them live. It was great to have such an intimate venue to soak up the nuances of the new songs.
After about an hour, they announced a “prostate break” and after a short intermission, they returned for their second set, which began with the familiar piano intro to South Side of the Sky. Wow, what a treat! It was a lovely version of this powerful song. Rick's keyboard evoked a music box during the spellbinding Wondrous Stories. Jon introduced 23/24/11 by saying that its title refers to a soldier in Afghanistan counting the days until he is able to return home. It is a similar sentiment to Tom Wait's Day After Tomorrow.
They started the "community singing" portion of the show with Your Move. Jon introduced it by saying "You know the words. Sing it like you know what they mean." Everyone sang along enthusiastically, perhaps too enthusiastically as we all skipped to a later part of the song too early. Jon had a laughing fit and then resumed the song, which segued into All Good People. Jon introduced the new House of Freedom by saying that young people today won't stand for corruption. It seemed apropos of the current Occupy movement.

Jon had been Tweeting that he was so happy to be able to play Awaken on this tour. He and Rick told the story about how they originally recorded it in Montreux. The rest of the band was in the studio, but Jon and Rick went to a church so that Rick could play his part on the pipe organ while Jon sang and played harp. They actually recorded the final version of the song over a phone line from two different locations way back in 1977! Who knew? Tonight's version was excellent, with the keyboards channeling a pipe organ and Jon's voice was particularly bright and clear.
For encores, they did Roundabout during which Jon fully let it fly and let his voice get raunchy. Jon's voice returned to clarity during Soon, in which he hit some amazing notes. They finished off the night with the always enchanting The Meeting. During the piano intro, someone took it upon themselves to yell thanks to Rick and Jon for making Worcester a stop on this tour. While I agree with the sentiment, just because Jon hasn't started singing yet doesn't mean that people weren't enjoying the lovely piano melody. And of course one down side of allowing drinks in the theater is that during a very quiet and touching part of the song, a bottle hit the floor and rolled down toward the stage, making a terrible racket. Despite the distractions, hearing Jon and Rick perform this song together was just magical, as it had been six years ago when we saw them perform it together in Canada.
The crowd was very respectful and attentive during the new songs throughout the course of the night.
The new songs worked well live. John and Rick were relaxed and confident onstage. We've been lucky enough to see them many times over the years in many different configurations. Seeing them re-interpret their work in such an intimate and casual atmosphere was quite enjoyable. At age 67, Jon is sounding as good as ever, arguably even better than with Yes. And Rick's personality really shines in this format. His playing was intricate and effortless. Rumor has it that they will be releasing a live album from the European leg of the tour. We are looking forward to it.
Posted by Craig and Steph at 7:15 PM